On 17th of May, members of the CDU district association Meppen as well as the CDU association of the municipalities Herzlake, Lähden and Dohren visited us. These were accompanied by Jens Gieseke (Member of the European Parliament), Marc-André Burgdorf (CDU district administrator candidate), Bernd-Carsten Hiebing (CDU member of parliament) and Holger Cosse (regional chairman).

After a company tour through the various departments, the company owner and chairman of the supervisory board of Hänsch Holding GmbH, Hans-Jürgen Hänsch was honoured for his 25-year membership of the CDU.

The official document, signed by Angela Merkel, with honorary needle and present was handed over by Holger Cosse, Bernd-Carsten Hiebing and Bernd Duisen. 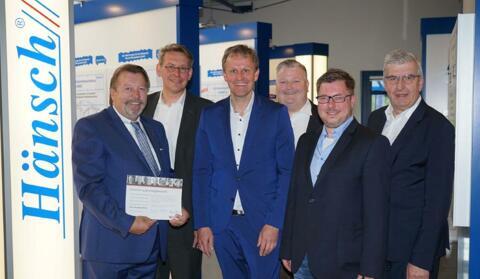